skip to main | skip to sidebar

What were those early nineties years like making music as college students at UC-Santa Barbara? Was the music more user friendly, more party-type songs? Did the crux of the band’s sound exist back then?

Making music at UCSB was great. We were young, studying music, living in Isla Vista. We had gigs nearly every weekend, often at porch or driveway parties on Del Playa, the street along the beach cliffs. Being able to play so much surely contributed to our development as musicians, particularly in jamming and learning how to stretch songs out. Our early original music definitely took some influence from the music of the times – Pearl Jam, Black Crowes, Spin Doctors. And collectively we’ve always had a soft spot for oldies and classic rock, so the music of Motown and The Beatles and The Stones were definitely filtering through us as well. And having the party be one of our main platforms for playing kept our sets most of the time pretty upbeat and fun, which could be said to possibly be a core character to what we still produce today. Obviously, over time you grow up a little more and have thoughts about other things, but I think ALO definitely continues to celebrate the fun side of music in our songs and shows.

You worked towards a degree in Ethnomusicology at UCSB. He’s putting his degree to work. Has his choice in academia influenced the band’s direction in any way?

Dan and I both took degrees in Ethnomusicology. And Zach and Dave were also pretty involved in a lot of the classes and ensembles. UCSB had a great department for that, and probably still does, and our studies definitely had an influence on the band. We were all living together back then too, so everything we were individually getting into found its way home in conversations and band practices, etc. I think the biggest thing the Ethnomusicology department did for us was open us up to just a ton of new music and get us thinking about how music and culture relate. I don’t think any of us have really followed the academic study as much since then. In a way, maybe we have become more like possible subjects of the study. We often find ourselves in long conversations analyzing what we do and how we relate to our community and culture. So maybe we’re a little bit subject and a little bit student. I bet Ethnomusicology students of this decade are getting into some pretty fascinating studies about the shrinking world, recycled influences, technology and communication. These are interesting times.

Man of the World was almost entirely recorded live, seemingly rare these days. What was the thinking behind recording live? Was it to leave room for spontaneity in the songs or because the band works so well as a live act?

We definitely wanted to approach this record in a more live way. We wanted the songs to feel like they came from jams. Those spontaneous and inspired moments when playing often produce some of our most treasured bits of music, and that was something we really wanted to tap into and explore.

The album is laid back and jam band friendly without leaning too far towards either. It also musically bears flavors like a large Jelly Belly gift box. Were there too many ideas to fit on one album?

There were certainly a lot of ideas. Our band in general has lots of ideas. We really try our best to fairly sort through all of them, and pick the ones that people are into the most. One great thing in making Man Of The World was that we had Jack in the producer’s seat which really allowed us to let all of our ideas flow and use him to make more direction calls. It was a liberating experience for us. Of course, every once in a while, there were ideas we had that we knew we wanted to pursue, maybe something Jack would’ve done different if it was his own thing, but he did a great job supporting us in those moments as well.

“Gardener’s Grave” sounds like Pink Floyd and Jack Johnson recorded in St. Croix. “Time and Heat” is carnival-esque. With so much variety on the album, are these new songs dying to be played live?

Yes! We haven’t found a good spot in the set for “Gardener’s Grave” yet but I really do love how that track turned out on the record. “Time & Heat” is another we’re still working up and I think will be a great live moment. “I Love Music” has really been feeling good, gets the dance party going, a fun one to stretch out. “Suspended” has had a few good turns in the set, another fun one to just let breathe and go as long as it needs. One thing about the new record is I feel that there is a fun ALO side to it but also a little more of a serious side, songs like “States of Friction” and “Big Appetite”. We didn’t really set out to cover such a range, it’s just sort of what came out. But I think people who give the record a few good listens will appreciate that range and find the little connections between songs that we were discovering and riffing on as we were making it.

Jack was super helpful in many ways. He’d point out spots in our lyrics that he thought could be a better. He helped us develop the story of the songs and the record. He kept things pretty positive in general and inspired us to just have fun with the process. We’d often be jamming through something, trying to figure something out, and he’d come into the room and pick up an instrument and be like, “Oh just keep playing...” and then he’d sneak some cool part into the jam that would open it up even more. He was great at keeping the ideas and flow happening.

You spent a great deal of time in Hawaii making the record. How hard was it to leave and how has it changed how you live life or view it now?

We’d been to Hawaii a few times as a band before making this record. The first time made a real strong impression for sure. It’s an irresistible place. The people are super nice and the landscape is paradise. Warm weather, beautiful beaches. The lifestyle is laid-back and there seems to be a real appreciation for community and nature. It was a little hard for us to be there inside the studio all day knowing what we were surrounded by, but it made every break outside so much better than anywhere else I can imagine. And the mornings and nights were the same. I think we all got a few little moments of exploration in, but for the most part we stayed pretty focused on the record. We knew our time there was limited and we really wanted to walk away with something we all loved.

Brushfire Records seems very much like a family as a label. What’s the atmosphere like at a place that appears so artist-centered?

Brushfire is very family oriented for sure. I feel like it probably trickles down from Jack himself. He’s a pretty family-oriented guy. So maybe he attracts artists, or artists attract him, that are similar in that way. I feel like all the musicians on the label are pretty connected. We’ll do shows together, hang out at festivals, invite each other to jam with each other, etc. It’s a good vibe, and I feel like it gives strength to a little scene of players. We all support each other and help each other however we can.

The band was once called Django. Why the name change to Animal Liberation Orchestra?

Django was the band Dan, Zach and I had back in high school, and for a bit of college. The drummer in that band left half way through college which put us on the path of looking for new drummers every couple years or so it seemed. Animal Liberation Orchestra & The Free Range Horns was the name we took at the end of our college days with our jazz band director behind the drums and helping us arrange parts for a five-piece horn section. It was what we were feeling in the moment, a funk orchestra that encouraged you to come liberate your inner animal, come dance and sing and be free.

The band has morphed over the years, such as adding/losing a horn section. Do you see the band as in constant evolution?

For sure, the band is always in a state of change, slight or great at different times, but always interested in discovering new things.
Posted by BOOTLEG MAGAZINE at 10:21 AM 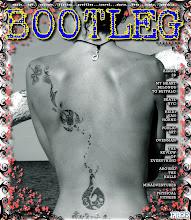